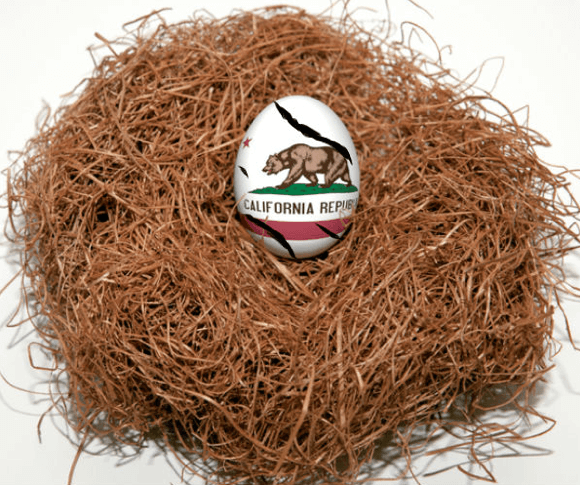 The biggest system in the country is in California, the public employee retirement system known as CalPERS. The problem is the pension fund doesn’t have nearly enough money to cover the cost of current and future employee pensions. It’s short according to some estimates by a trillion dollars, which is equivalent to eight years of the entire state budget.

CalPERS has been hiding the enormity of the problem using the gambler’s fallacy – by assuming that in the future, there will be huge and unlikely returns on their investment.

Over the past 20 years, CalPERS has generated an average return of 6.58%, underperforming the 8.25% average they claim they can earn back in 2001. (Last December they assumed an 7% rate of return). This 1.67% difference is not immaterial. Based on this analysis, back in 2001, when CalPERS should have been collecting 25.8% of payroll, they were only collecting 16.4% of payroll.

Most economists believe the assumed rate of return should be lower to 3-4%. In addition, after a nine-year market rally there is pressure to de-risk the CalPERS asset allocation. By reducing the global equities allocation you will effectively reducing the assumed rate of return. If you lower the assumed rate you push up the contribution level of employers and employees to address the unfunded liability. At a board workshop in mid-November, CalPERS managing investment director Eric Baggesen presented four possible portfolio changes to adopt beginning in 2018. One option, including a 50 percent allocation to global equities and a 28 percent fixed-income target, closely resembled CalPERS’ existing portfolio at the end of September, adhering to the 7 percent expected return the board adopted in December 2016. But two other options entailed a cutback on equity exposure, with the most drastic reducing the portfolio’s global equity target to just 34 percent and adopting a 44 percent fixed-income allocation. This portfolio, Baggesen said, would decrease the fund’s expected volatility to 9.1 percent from 11.5 percent — but it would also bring the fund’s expected return down to 6.5 percent, increasing the need for employer contributions.
Investment risk is not the only consideration. Political and Career risk must not be discounted. Governor Jerry Brown recently weighed in on a seemingly obscure state Supreme Court case that—without exaggeration—will determine the fiscal future of California’s municipalities. It’s a about a firefighters’ union benefit known as “airtime,” but it’s really about the ability of state and local governments to roll back future pension benefits they can no longer afford. Airtime allows union workers to buy additional fictional years of service and artificially boost their pension checks. When the Legislature created Airtime in 2003, it was never meant as a irrevocable taxpayer-funded benefit (it was supposed to pay for itself).

There’s no question Brown and his team understand what’s at stake. In 1999, California passed a law that started a wave of retroactive pension increases that were predicated on lofty stock market predictions and CalPERS then has a surplus of $33 billion. A series of court decisions has created the “California Rule.” It means that once a public employee receives a pension benefit it can never be reduced unless that employee receives something of equal or greater value. It is the main hindrance to reining in soaring pension costs that are eating up municipal budgets and causing city officials to become pension providers that offer a few services on the side.

Most pension reform ideas, whether pursued legislatively or via initiative, run into this impediment. Sure, California Public Employees’ Pension Reform Act of 2013 (PEPRA) and many local governments have reduced pensions for new hires. For example, in 2011, Los Angeles voters approved a new, lower cost pension tier for newly hired cops and firefighters.  And as of 2016, newly hired civilian employees will go into a less generous pension tier. Los Angeles is also requiring employees to contribute to a fund to finance their post-retirement medical benefits. But it will take decades before those people retire. The California Rule locks in unsustainable benefits for current workers and retirees.

So if Governor Brown is able to finally spending his political capital to take on the unions than those that receiving public pensions or are expecting to do so must take notice. With Proposition 13 firmly in place, Governments are left cutting services, laying off employees and raising taxes and even mulling bankruptcy because there’s little else they can do. Bottom line: cities, counties, school districts and ultimately taxpayers are footing a much bigger and likely more realistic bill. CalPERS estimates about a third of local and state budgets go to pay for public pensions. Some experts at a estimate it’s closer to 60 percent and growing. That could bankrupt some local governments.

If you are a public employee don’t ignore your 457 plans and prudent secondary savings strategies. Hoping that the stock market fully funds CalPERS or that the California Rule will remain in no longer a prudent assumption. Those that are nearing retirement should run their pension projections with a reduce assumption of 70% of estimated benefits.