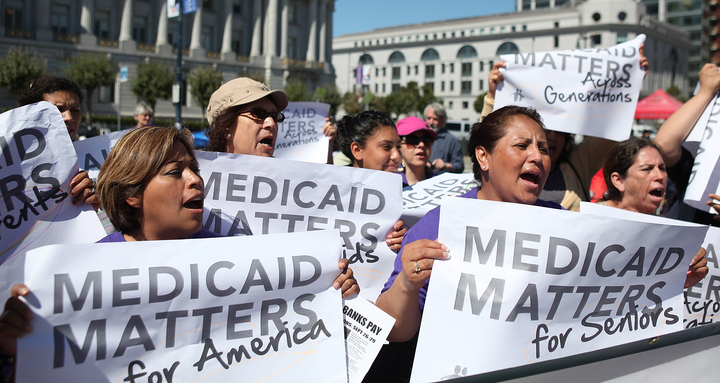 Many couples face an uphill battle when one spouse has a catastrophic health crisis and needs long-term care. Most people are uninsured for the risk of the Medicaid spenddown and often the healthy spouse is faced with sticker shock when the nursing home bills start coming in. There are four rules that – when used together – can help the community spouse avoid financial devastation.

In every state but California, Medicaid uses a 60-month lookback rule on the transfer of assets. When a nursing home patient applies for Medicaid, the state will look at five years of bank and account statements. As part of the eligibility review process, the state makes the applicant account for any gifted funds or any assets transferred without receiving full consideration. For instance, a gift of $50,000 would trigger a transfer penalty for the full amount. But if the applicant sold a $150,000 house to his granddaughter for $100,000 they would treat that the same as gifting the $50,000 in cash.

Penalties are prospective from the date of application. Assuming the average cost of care is $10,000 a month. Medicaid determines the penalty by dividing the average cost of care into the total gift. The applicant who gave away $50,000 would be ineligible for nursing home care for five months after the application was filed with the department. What confuses a lot of people is the idea that there is no way to help the healthy spouse protect assets because it would have had to have been done prior to the 5-year lookback window. That’s simply not true. Most asset protection techniques are designed to work AFTER the patient enters the nursing home.

When a married couple has one spouse in the nursing home and another spouse living at home (called the “community spouse” by Medicaid), the amount of money they are required to spend down is governed by a formula. States either use the one-half deduction formula or the straight deduction formula, both of which are confusing to the average community spouse. In 2018, the maximum a community spouse can keep is $123,600. This is known as the Community Spouse Resource Allowance (“CSRA”).

The CSRA is determined based upon the value of the assets on the snapshot date. The snapshot date is typically tied to the date of institutionalization that proceeds the first thirty days of care. Some states make it the actual date in time and others make it the first of the month when that occurs. Countable assets (i.e., assets which count towards the spenddown) are added up on the snapshot to determine how much the community spouse can keep and what amount must be spent to achieve Medicaid eligibility. Many nursing homes DO NOT disclose this to the nursing home patients or their spouses because there is hope that they will private pay longer than is required.

A married couple with $400,000 in countable assets would only be able to keep the CSRA of $123,600 and would be on track to have to spend down $276,400 before Medicaid eligibility can be established. That amount represents the couple’s total exposure to the spenddown. Given the high cost of care, this couple is likely to spend down three-fourths of their retirement savings on the cost of care in slightly over two years. When determining the assets available on the snapshot date, Medicaid counts assets owned by both spouses and does not care if there is a prenuptial agreement in place.

Excess recourses can be converted into income. This is known as the “asset-to-income rule” although it’s not called such in the Medicaid statutes. Medicaid has specific rules on the use of promissory notes and certain Single Premium Immediate Annuities (SPIAs) that it deems to be compliant with strict rules on payout and revocability. These annuities are known as the Medicaid safe harbor annuities because of the safe harbor language protecting these annuities written right into the federal Medicaid statute in 2006. The purchase of a Medicaid safe harbor annuity converts countable assets into income. These are typically purchased on behalf of the community spouse who is not required to contribute her income towards the cost of her husband’s care in the nursing home once he’s on Medicaid. As long as the annuity meets all safe harbor rules, the purchase is NOT considered a transfer for less than fair market value and the five-year lookback rule does not come into effect.

Because there is typically a desire to maximize the amount of money a community spouse can keep liquid, the purchase of the annuity often takes place after the patient goes into the nursing home in states that use the one-half deduction formula. This way the community spouse can have all of the countable resources available on the snapshot date to maximize the CSRA. Then the excess resources are placed into the Medicaid safe harbor annuity and the couple applies for Medicaid. The purchase of the annuity brings the couple’s countable assets below the resource limit IMMEDIATELY!

RULE 4: ONLY ONE MARITAL SPENDDOWN

Many people – advisors included – falsely think that the CSRA is an ongoing asset limit for the healthy spouse. However, the last rule to note here is that there is only ever one spenddown for a married couple when the CSRA is set. Once the assets have fallen below the CSRA, the couple applies for Medicaid for the institutional spouse. On the first Medicaid application they look at both spouse’s assets held individually or jointly to determine if the couple has spent down below the resource limit. Once the Medicaid department determines that they have, Medicaid is approved for the spouse in the nursing home. On subsequent redeterminations, Medicaid no longer inquiries about the community spouse’s assets except to make sure that assets held jointly were given exclusively to the community spouse. Those assets can no longer be held in the name of the institutional spouse whose assets will be limited to the state’s individual countable resource allowance (usually $2,000 or thereabout depending on the state).